Heavy pelvic pain, fatigue, or bleeding between periods are some of the symptoms of endometriosis. A disease that 1 out of 10 women suffers nowadays and which is not given the attention it should be.

Do you have severe  pelvic pain during menstruation? Although it is true that during the bleeding period many women suffer from dysmenorrhea, it is necessary to pay close attention to its origin. In fact, endometriosis is a disease suffered by 1 in 10 women and a large part of them are undiagnosed. We should not confuse painful periods with intense pelvic pain resulting from endometriosis. But how do you tell them apart?

Every month, the endometrium, which is the tissue that lines the inside of the uterus inside, grows to make room for the egg that could be fertilized. During the menstrual cycle it undergoes changes in response to hormones and ends up falling off during menstruation naturally. But, in the case of women with endometriosis, one or more foci of  endometrial tissue are located outside the cavity of the uterus  causing bleeding (similar to menstruation) in parts of the body where they should not, such as the pelvic cavity, the uterine tubes or the ovaries, causing pain and inflammation.

What is endometriosis? Women can experience severe pelvic pain when the endometrium, which should normally only grow inside the uterus, becomes extinct outside the uterus.

As we have already explained, pelvic pain is the main symptom of endometriosis. It is true that, depending on the location and number of foci, the severity of the disease will vary in each woman. What does happen is that, since endometrial tissue reacts to changes in hormone levels, symptoms worsen during menstruation , but improve during pregnancy or menopause, when hormones do not stimulate these endometrial tissue foci.

Symptoms are not regular and change as the disease progresses. In the early stages, symptoms are usually milder and confused with common pain without being associated with a serious disease such as endometriosis. Once the disease progresses, if you notice that the symptoms begin to become more severe, it is time to go to a specialist so that I can detect if you really have endometriosis.

Other possible symptoms include: 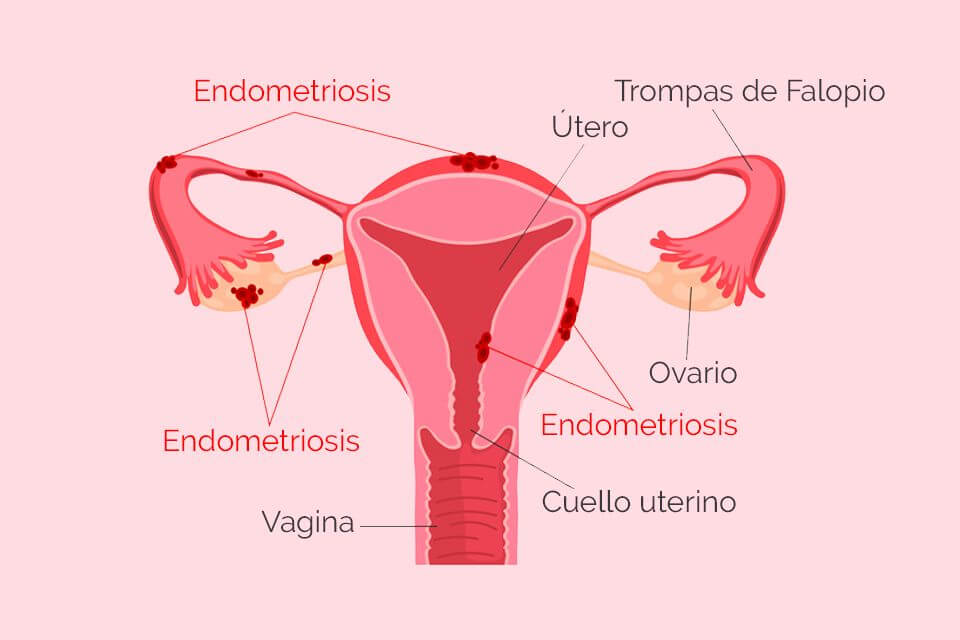 How is endometriosis diagnosed?

The first thing is to go to a health professional to evaluate the symptoms and medical history. The only way to know for sure if you have endometriosis is with surgery. Laparoscopy is used to diagnose endometriosis  . This type of surgery uses a laparoscope, a thin tube with a camera, and light. The surgeon inserts the laparoscope through a small cut in the skin. The health professional will be able to make a diagnosis based on how the endometriosis patches look. A biopsy may also be done   to obtain a tissue sample.

Many women wonder if endometrysis influences their fertility. According to the American Society for Reproductive Medicine, 30% to 50% of women with endometriosis can experience infertility . Endometriosis can influence fertility in several ways, but with proper treatment, many women can finally have sons or daughters.

But how do you treat endometriosis? The treatment for endometriosis usually involves drugs or surgery,  although a relaxed lifestyle and a healthy diet can help antiniinflamatoria greatly alleviate symptoms.

What is the perfect manicure for you according to your type of nails?

Watch out for the sun!

Sleep disturbances: what they are and how to combat them

How To Make A Face Mask At Home Telugu