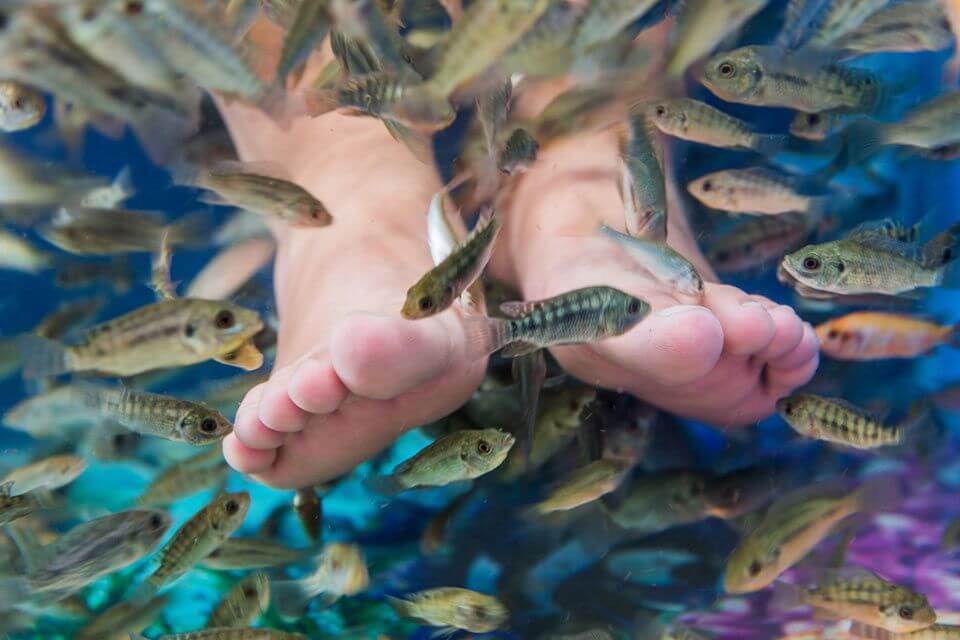 This practice in which dozens of fish feed on the dead cells of the feet could spread HIV and hepatitis C.

Fish pedicures are not new to the West. For more than 10 years, this Asian treatment has been applied in shopping centers or beauty salons. At first it was curiosity, later doubts came about a practice that accumulates lovers and detractors. It seems simple, put your feet in a container full of water while dozens of fish  feed on the dead cells leaving only the new ones. But, are they all advantages in this type of treatment?

The pedicure with fish-filled water containers, also called ichthyotherapy , became a trend starting in 2010. Since then, millions of people have already tried to put their feet under water and have the fish do the rest. It is actually a simple process that takes place in  sessions of about 20 minutes.  First, the feet are cleaned with water and neutral soap to remove the remains of creams or dirt that could harm the fish. Before the start of the process, a professional  examines the feet of the person who is going to perform the treatment to make sure that there are no cuts or wounds. After this revision, the feet are introduced into the container with water where the fish are found.

But these fish are not just any fish. The fish used in this type of treatment is known as “doctor fish” or Garra Rufa . It is a small and elongated fish from Asia that can reach 15 cm in length. However, in this procedure only fish that do not reach 5 cm are used. Its function? Although they are herbivorous fish, in the absence of plankton, they can also eat pieces of human skin. Hence, once the feet have been inserted into the water basin, the fish themselves are responsible for removing the dead cells from the feet .

However, this practice has been widely questioned by health agencies, who confirm that this treatment could be very dangerous to health. Other diseases, pedicure with fish could spread  HIV and hepatitis C . The British Health Protection Agency (HPA) ensures that people with diabetes, psoriasis or a weak immune system are particularly vulnerable and should not participate in this cosmetic practice.

The health agency warns that the risk of infection for the users of  ichthyotherapy  is low but cannot be ruled out. The factors that could cause infections are due to the quality of the water in which this treatment is performed. According to the agency, the water in the tank where these fish live contains microorganisms that could cause bacteria problems  . If a user is infected with a virus that can be transmitted through the blood (such as HIV or  hepatitis ) there is a minimal risk that these diseases will pass from one client to another.

Numerous spas and beauty centers in Spain continue to carry out fish therapy. So far, if the correct hygiene procedures are followed, the risk of infection is very low . The best, as recommended by health agencies, is to change the water after each client. The problem is that it is not possible to continually sterilize the container since there are about 200 fish inside  .

This practice has been banned in more than 10 states in the United States.

But, there is not only in the pedicure with fish risks for the client. In addition to possible infections, this practice involves a moral ethical debate about fish and their care. Occasionally, some centers starve fish to make them more effective in eating patients’ dead cells. Due to its risks, this practice has already been prohibited in many places, such as more than 10 states in the United States .

How does chronic pain influence your mood?

Tips To Get Rid Of Back Acne To Flaunt Backless Dresses

Hair removal with thread: does it work?

Advantages and disadvantages of all hair removal methods